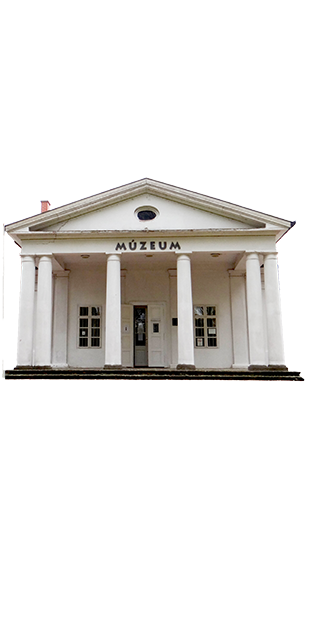 The Kiss Pál Museum is located in a classicist-style mansion built by the Lipcsey family in the first half of the 19th century and has a beautiful ancient park with an excellent location in the capital of Lake Tisza, Tiszafüred.

The institution is one of the oldest country museums in Hungary and celebrated its 140th birthday in 2017. It was established by an archaeological association in 1877 (Tiszafüred Archaeological Society), which first collection was compiled by volunteers and emerged from enthusiastic research and the donation of local citizens.

Endre Tariczky and Béla Milesz, the founders of the Archaeological Association

The establishment of the voluntary organization was commissioned by Endre Tariczky (1818-1912), a Roman Catholic parish priest in Tiszafüred, who, through the organization and implementation of archaeological excavations, gained national awareness in scientific life.

The number of members of the Association soon rose to 135 people. The aim of the Tiszafüred Archaeological Society was to excavate the antiques, spread the archaeological knowledge, develop, nurture and create a library and an archive of archaeological artefacts found in the region.

The searching area covered the middle of the Tisza River: from Tiszaroff and Kőtel to Poroszló. The rapidly growing number of artefacts was divided into four main groups: the medal collection, the antiquities, mixed items and the library formed the main units.

The other head of the Association was Béla Milesz (1843-1912), a teacher of the Reformed School, who documented the collected findings with professional precision. The activities of the two local patriots, Endre and Béla, have determined the cultural life of Tiszafüred for more than three decades.

In 1896, the association changed its name to the Museum and Library Association, and then the prestigious collection was placed in the Municipal House.
During the World War, the volunteers could not collect more artefacts, and a significant part of the collection was lost during the war. Unfortunately, its collection of medals and antiques was almost completely destroyed.

After the war, the remaining valuable museum collection was reorganized and restored. In 1952, the collection was moved to the former building of the Leipzig mansion and named the Museum after of Pál Kiss, a military general.

Intensive collection of ethnographic and local history has been carried out over the past decades, resulting in several valuable publications and scientific researches of Dr. Ankó Füvessy and István Vadász, previous directors of the Kiss Pál Museum.

There are currently two permanent exhibitions in the main building of the institution, one opened in 2001: Masters and Masterpieces – artistic craft and homecraft in Tiszafüred. It exhibits the history of Tiszafüred from the end of the 20th century.

The other permanent archaeological exhibition was opened in the spring of 2018: 7000-year-old treasures of our city. The title of the exhibition refers to the rich history and artefacts hidden both underground and in old, dusty warehouses.

Objects excavated and preserved by Endre Tariczky and Béla Milesz, finally returned to the city, commemorating the rich culture of the people who once lived here.